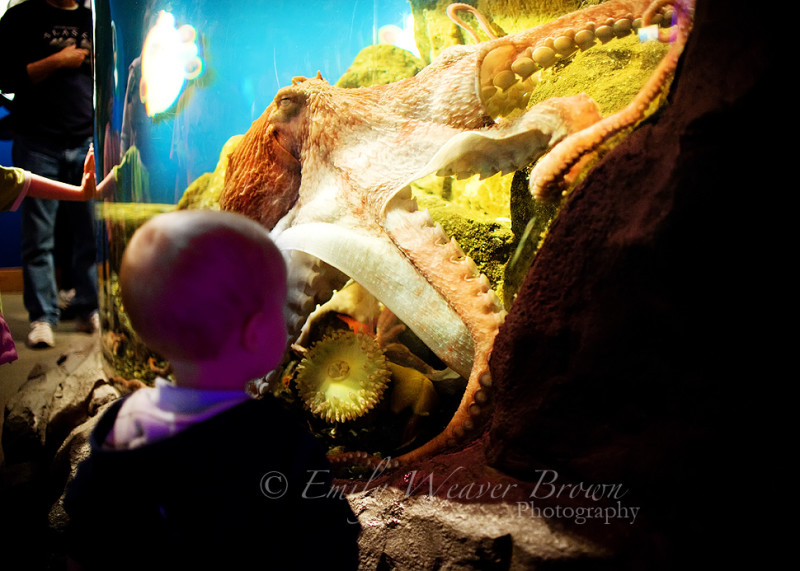 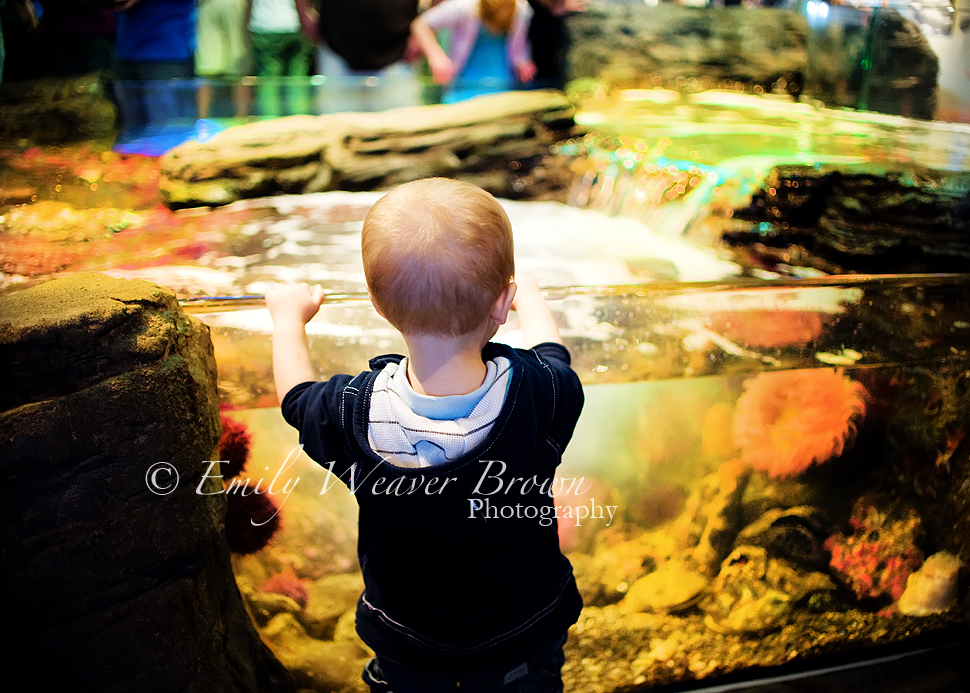 My Friend Rane and her son Jack are in town and on Monday Hayven, Rane and I took the kids to the Seattle aquarium.  I had a lot of fun shooting with my D700 in the dark with no flash.  Simon got a lot more out of this Aquarium visit then he did last time. Granted last time he was only 9 months old. Now he is so much taller and can really see (and feel) into the tanks. He can also say “ish” (fish) which he does a lot as he frantically signs it. 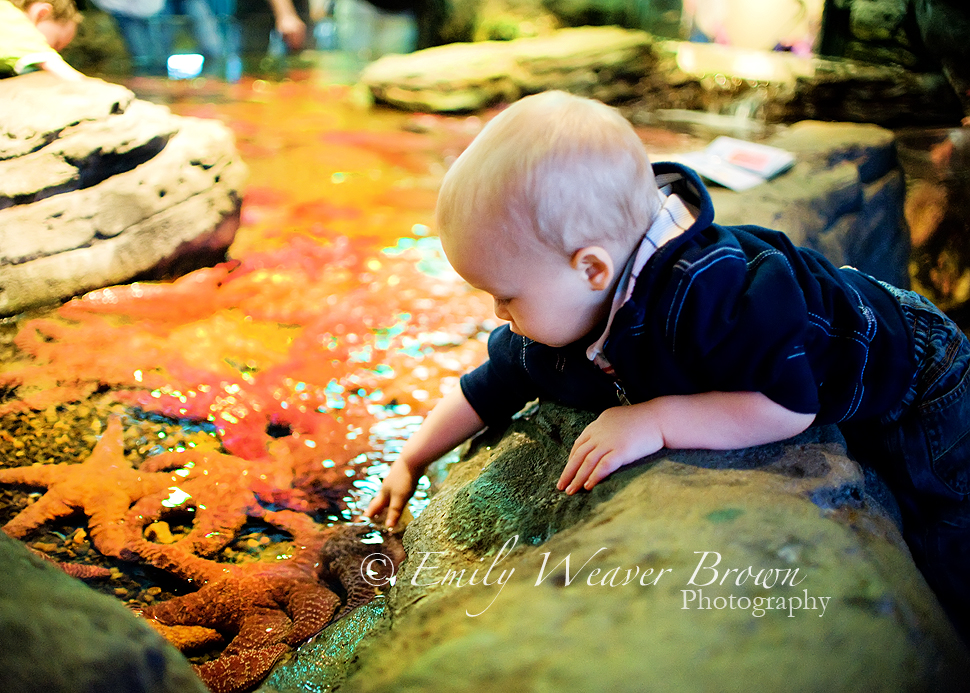 Here he is touching some sea stars

I am a little frustrated with the lack of ASL for aquarium words. There are no ASL signs for “Anemone”, “Jelly Fish”, or “otter”.  So we settled for making up our own signs for the words for which there are no signs. Simon added “crab“, “otter”, “seal“, “octopus“, and “whale” to his vocabulary.  In case you are wondering there is a wonderful online video dictionary called Signing Savvy where you can look up all of the ASL signs. Also the ASL browser is very good. I have started to learn that there are “dialects” within ASL and not everyone does the sign the same way. I have also had to modify a few signs because it is very hard to hold a toddler and use both hands at the same time so a lot of our signs have become one handed. We have a lot of fun with it. 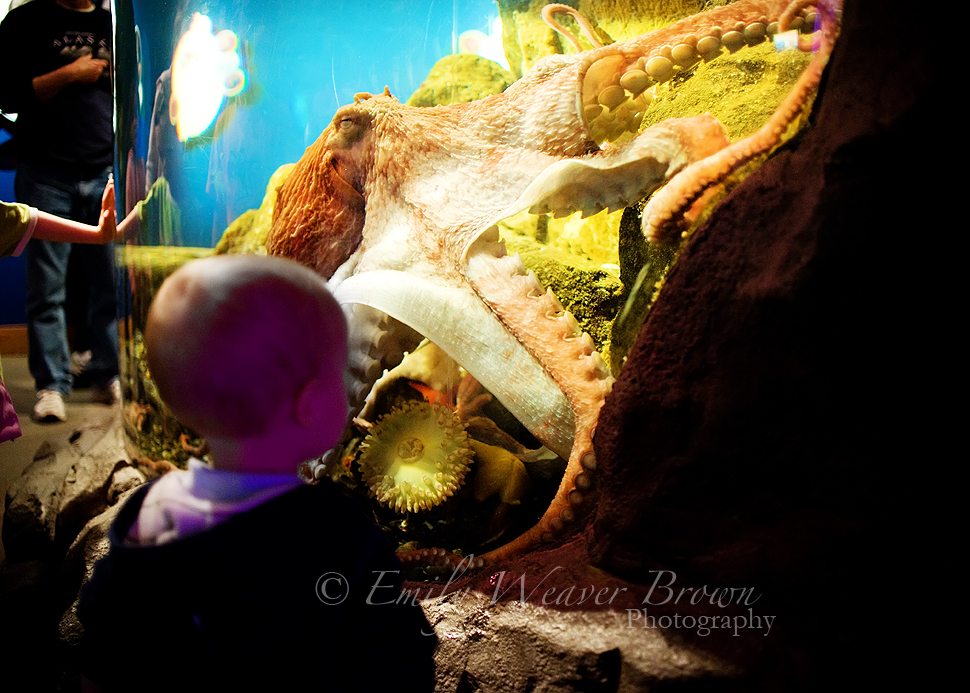 This was the most active I have ever seen and octopus. He was cruising all over that tank. Too bad you can’t put your hand in that one : )

I continue to be impressed with the aquarium staff. They have so many employees just standing around answering questions and talking to kids (and adults) about what they are seeing and touching.  They have this Jelly Fish ring which you can walk though and the jelly fish are sort of slowly circulating around in it. They shine brightly colored lights through it turning the jelly fish a rainbow of colors. (That’s why Simon’s face is purple in the above shot – the light was reflecting off the jelly fish display which is right next to the octopus.) When Simon saw the jelly fish floating through the ring he exclaimed “Oh! Bubbles!” He loves bubbles and I guess jelly fish do sort of look like bubbles. It’s so fun now that he is able to communicate more I get little glimpses of what is going on in his brain.  He likes to know what everything is called now. He will point to something and say “this?, this?, this?” until I tell him what “this is” He usually wants me to say it 3 or 4 times and sometimes he will try and repeat it back to me (or sign it if I happen to know the sign).  The other day he was eating some fish sticks and kept saying “this?, this?, this?” and pointing to them. I told him “That’s fish” and I signed fish. he looked and me and said “ish?” (and signed it) and then asked again as if in disbelief “ish?”

I was just thinking – they probably go through gallons of Windex.

While at the Aquarium I realized that  that I have never once taken my camera to the zoo and we go there all the time (we have a membership) but we have only been to the aquarium 2 times and both times I have taken a lot of photos. We are planning a trip to the zoo tomorrow and I will remedy the lack of zoo photos.