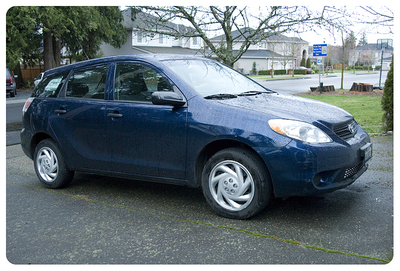 this is kind of a depressing story and I wasn’t going to share it but people keep noticing the car and asking questions… So I will just tell it once more here. First of all let me say everyone is fine. We had a little scare but everything turned out ok.

If you have known Myles and I for very long you will have noticed that we have a hard time hanging on to a car for more than a year or so. We must have a giant “hit me” sign on our bumper because that is what happened to the the last two cars (the Scion, and the Volvo). Well this time it was my fault. (and just for the record I have never had so much as even a speeding ticket) I was just running some errands in my Mazda Protégé, it was raining (what else this is Seattle) and while trying to get on to the freeway traffic came to a sudden stop and I rear-ended the guy in front of me. He was driving a big pick-up so I pretty much just went underneath him, pealing up the front of my car as I went.  I have said it many times, bumpers are pretty much useless useless everyone on the road has one at the same height. It is pretty ridiculous to have a law regulating the bumper height on cars when half the vehicles on the road are “light trucks” and exempt from the rule.

I didn’t think I was hurt but my huge  belly was sure throbbing. A fire truck happened to be driving by and stopped and of course as soon as they saw a pregnant lady they went into over drive. And so I got my first (and hopefully last) ride in an ambulance. Since I was only a few miles from home I called Myles and here was there in about 3 min. so he got to ride in the ambulance too. At the hospital they checked the baby and made sure everything was ok (everything seemed fine) then they made me go up to the maternity floor for observation. It is a good thing that they did because I started having 3 min apart contractions. Apparently this is a typical reaction to “trauma” They weren’t strong contractions just frequent. Since I was only 33 weeks at the time they used some miracle drug to drug to stop the contractions, it had the side effect of making me feel like I had about 12 cups of coffee – but it worked so I am not complaining.  After about 6 hours, a lot of poking and prodding, peeing in cups, and being stuck with needles they let me go home. I had explicit instructions to return to the emergency room if the contractions started again (they have not). I woke up the next day extremely sore but otherwise ok. Of course my little Mazda Protégé was totaled, and I had just barely had it a year.  This is my new car, a 2005 Toyota Matrix. Hopefully I will be able to hang on to it for a while.   Myles is getting really good at finding great deals on craigslist but we don’t want to buy another car for a long time. Myles took some pictures of the Mazda at the salvage yard but they are just too depressing for me so I will not be sharing them.

I was a little worried that my midwives would tell me that I was now a high risk pregnancy and that I would not be able to deliver at the Puget Sound Birth Center (they only deliver low risk women and babies) but they said as long as I make it to 37 completed weeks before going into labor I can continue with my plan to deliver there. Currently I am 36 weeks 4 days so this baby only has to stay in for 3 more days! I know most first time moms go past their due date and I am really hoping that I am not one of those 42 weekers, I can barely sleep as it is.