Today was Myles’s 29th birthday. We had a small family celebration in our back yard – it was totally a surprise to Myles.  He is such a sweet husband and a good father it was fun to celebrate his first 29 years. 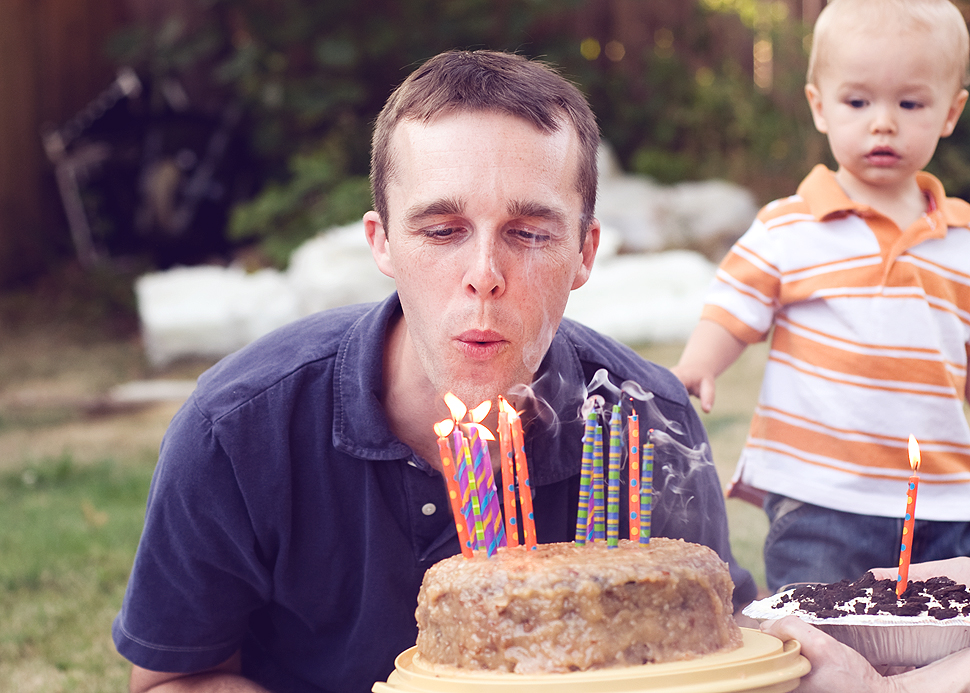 Simon was thinking about getting in on that cake action. We had Myles’s two favorite desserts; German chocolate cake and grasshopper pie.Happy Birthday sweetie!

What’s all that white stuff behind him ? – well that’s our insulation from the crawl space. It seems that a family of opossums has decided to make their home under our house. One of them recently died and really really stunk up the house. Myles, tried to deal with the problem on Sunday only to discover the giant nest they have made down there. When a live opossum fell out of the insulation and nearly landed on his head he decided he had had enough and that this was a job best left to the professionals.  I spent Monday morning on the phone trying to find someone who could take care of our opossum infestation only to be referred from one company to another. It seems that Opossums are considered “wildlife” and in the state of WA you have to have a special license to trap and remove them. I finally found someone who came out to the house and dug around in the insulation in the crawl space until he found the decaying opossum carcass that was stinking up the entire house,  he removed it for a mere $75. I don’t think this company understands their negotiating position because I would have paid just about anything to have that stink gone and there was no way I was crawling under the house 75 bucks seems like a bargain.  Unfortunately the dead animal was an adolescent which means that most likely there is a mother opossum and more babies (up to 13) around. Obviously Myles saw one of them.  So we have some live traps set and I get to check them every morning. If I find one I will be sure and post a photo 🙂