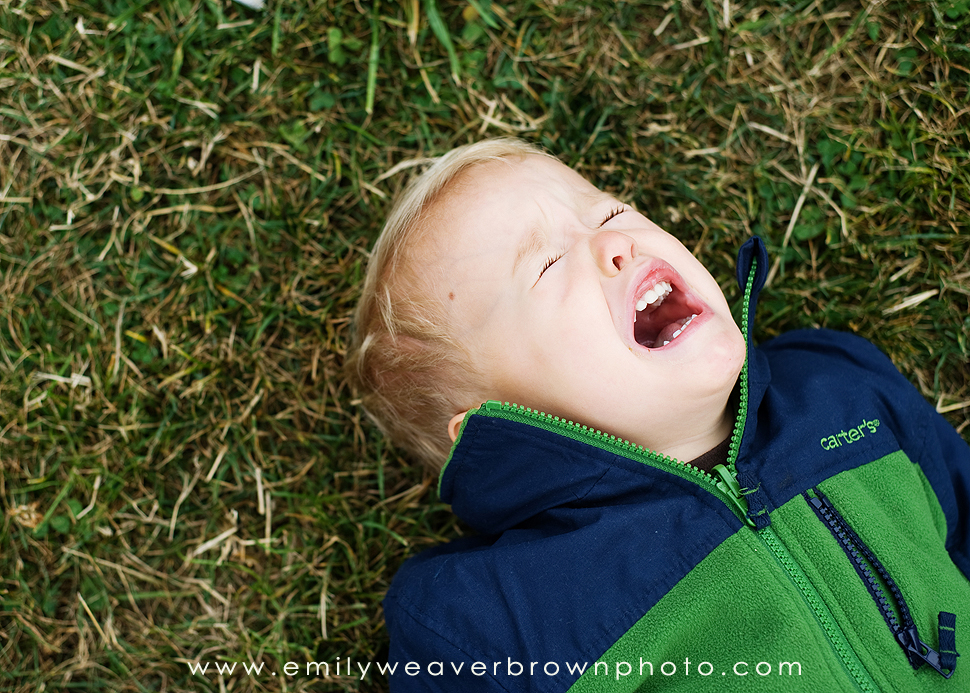 Yep, that pretty much sums up my thoughts…
So a couple of weekends ago was Simon’s last soccer lesson. And by last I mean the last one I am signing him up for until he is old enough to play with out parental supervision.  So the back-story is this: Myles feels that Simon needs more “structure” meaning that I am not a very structured person and I don’t provide a structured enough atmosphere for Simon (He is probably right). So Myles thinks Simon should be in a few activities where there are required task and directed play. So other than swimming lessons (which Simon has been doing since he was 5 months old) we have tried various art and music classes, none of which I have felt were very worthwhile. Honestly there is just not that much you can do with a 2-year-old short of putting them in daycare. 3 seems to be the magical age. At 3 you can sign up a kid for a plethora of things. So anyway, I came across this introductory soccer program and they had a parent-tot soccer for kids as young as 18 months. 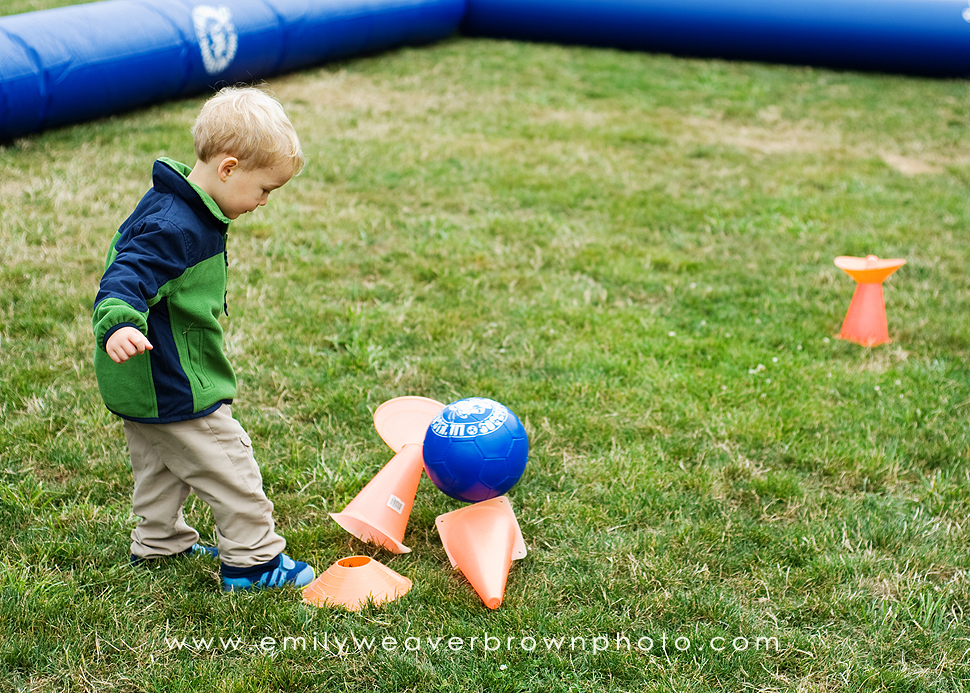 I am not a big fan of soccer, I know a lot of people will find this sacrilege but I find the sport rather boring. I think it would be a lot more interesting if there were more scoring and less just watching a ball go back and forth. I think they should play with out goalies or at least with multiple balls, but I digress.  Myles thought parent-tot soccer would be a great idea and he wanted to be the ”parent” to take Simon so I signed them up for a 2 and 3-year-old Saturday morning class.  The problem is that with Myles’s work travel schedule I ended up being the “parent” at least 50% of the time.  I found that I really dislike hauling my huge pregnant butt across a soccer pitch early Saturday morning chasing after 2-year-olds. It’s really not my idea of a good time. 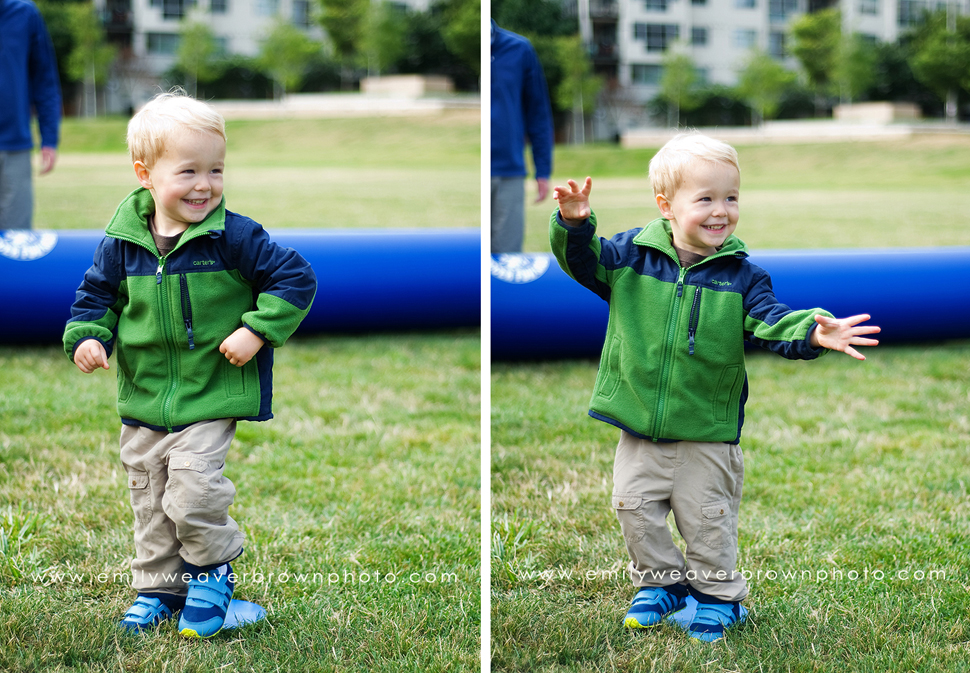 Despite the first photo Simon actually really like it. The problem is that it is really hard to keep a bunch of 2 and 3 year olds on task. The coach Justin was really really good with the kids, he explained things on there level and had an infinite amount of patience. In 2 and 3 year old soccer they don’t actually scrimmage or play games – mostly soccer consisted of drills and little games no individual activity lasting more than 5 minuets. But it’s still really hard to keep a 2 year old interested in an activity like this for more than about 2 min.  The coach would have this kids something like get a ball from one end of the field and dribble it down to the other and score it into the goal. Simon would do this 2 or 3 times and then be ”over” it and look for something more interesting to do, only there would still be a pile of balls that had to be moved. So I would have to convince him to stop wearing a cone for a hat or to get off the pitch divider and to keep moving balls.

In the first photo he was really mad at me for removing him from the pitch divider and telling him to keep moving. He laid down on the ground in protest and screamed. I had my camera in my hand to I took his photo. – once he realized what I was doing he got right  up – he couldn’t be caught cooperating for a photo!  Despite all of this he actually did improve at kicking and manipulating a ball (shocking!). 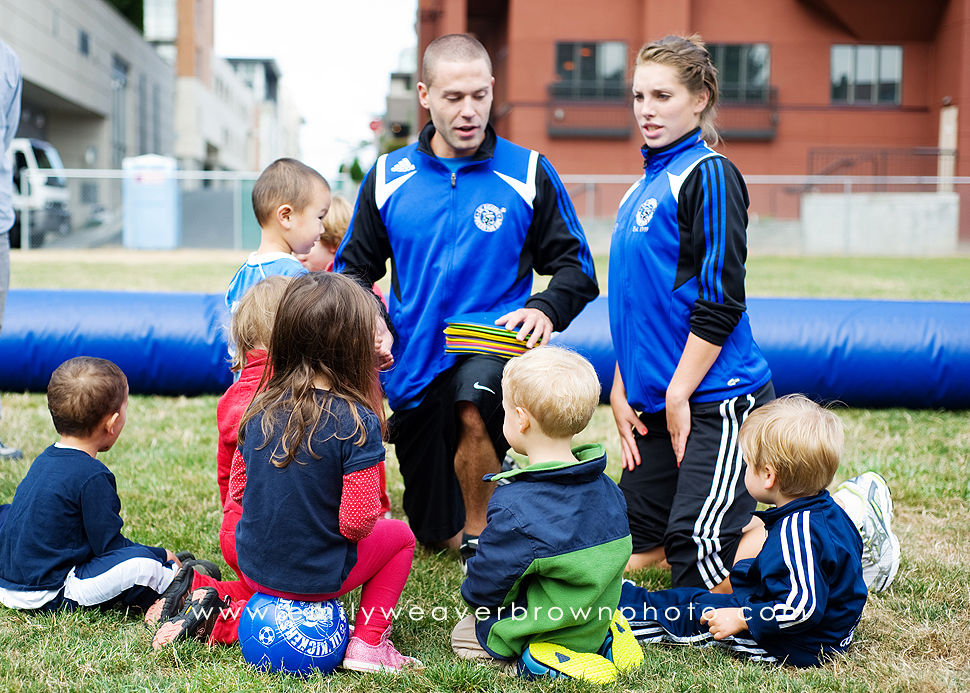 I had the option to sign him up for fall indoor soccer but I am opting to wait until February when he turns 3 and I can enroll him in just 3 year old soccer, which I can just watch from the sideline.    So for the fall he moved up to no-parent-in-the-water-swimming-lessons (YES!) and I found a gymnastic class for 2.5 year-olds that does not require parent participation (SCORE).  So we will see how those two activities go and  we are also doing a music class. still it only works out to like 2 hours total of “structured” activity per week but Myles should be happy. Any thoughts of toddler activities/programs? 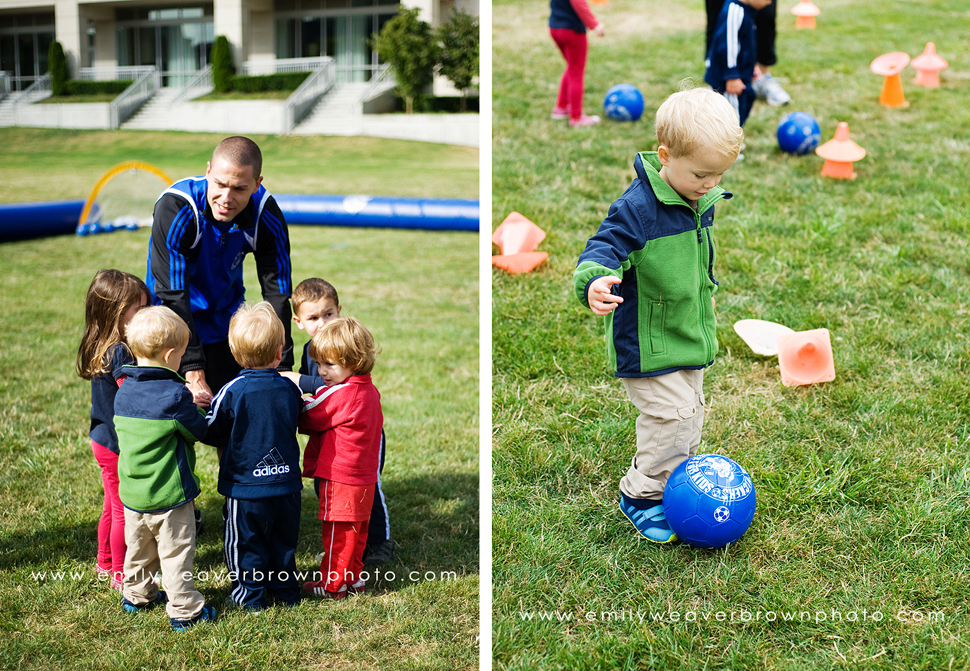