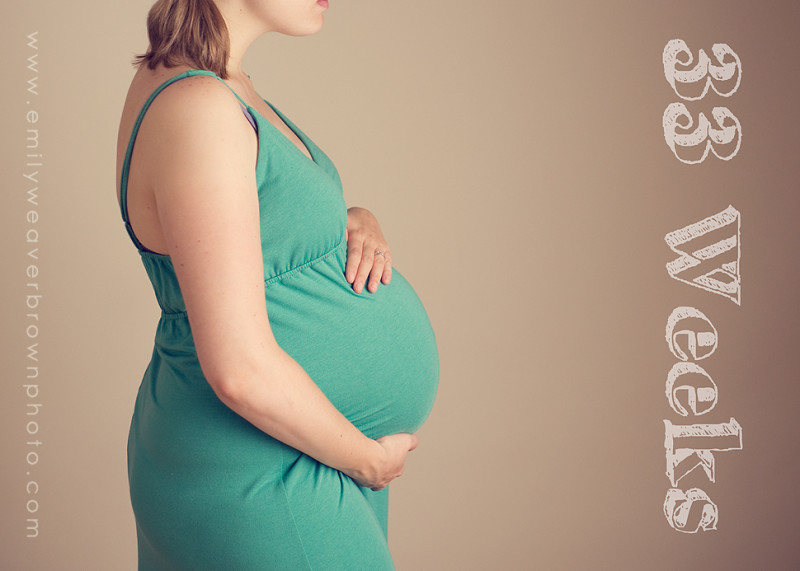 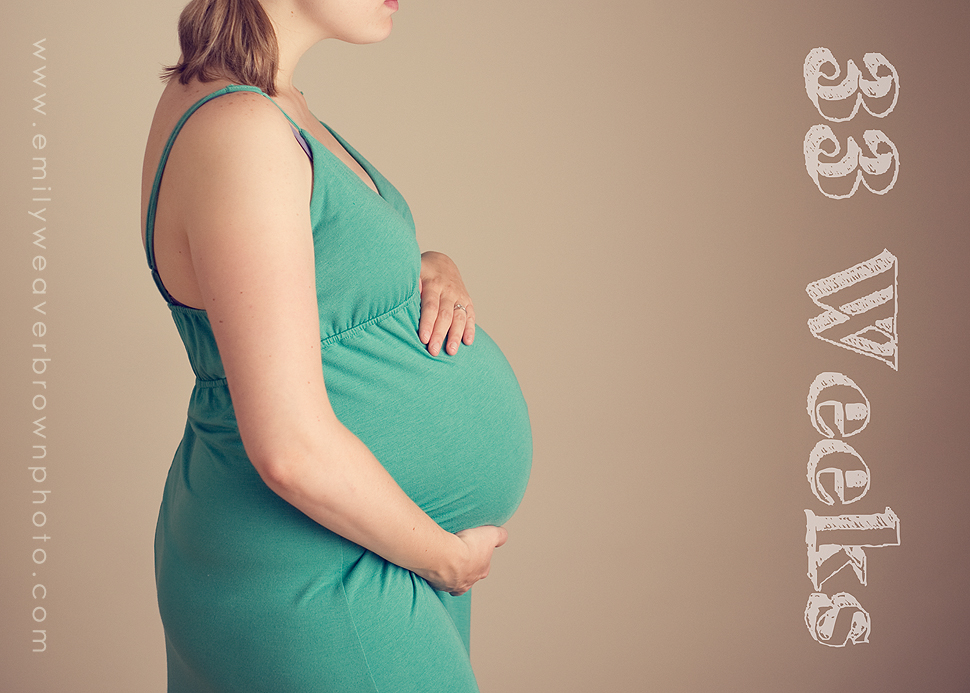 I made it through week 33! at this point in my pregnancy with Simon I rear-ended a truck in a bad rain storm in stop and go traffic. I was only going 30 or so and there was almost no damage to the truck but my Mazda was totaled. The air bags didn’t even go off but the seat belt did that hard retract thing against my belly and it hurt! As soon as the guy in the truck saw that I was pregnant he called 911 which in at the time I thought was over reacting but in retrospect it was probably a good idea. My belly was super tight and hurt where the seat belt had been and I started to get really worried about the baby. My car was undrivable because the front end was smashed down over the tires and when the ambulance got there (I was standing by the edge of the road at that point) they had me get and convinced me to take a 10min $400 ride to the hospital (ambulance rides are very expensive!). When you are pregnant the ER really wants nothing to do with you they pass you along as fast as they can to labor and delivery so that is how I ended up in the labor and delivery triage unit at our local hospital.  At this point I was feeling fine but just wanted to make sure the baby was ok. The labor and delivery folks wanted to run every test in the book so that’s what we did – though I am sure most of it was unnecessary. The ER had my records from my midwives faxed over and then  I gave blood, peed in a cup and a bunch of other stuff I wont mention. At this point I started having really regular contractions (every 3 minuets)  but they were very weak – but I cold feel them. I reported this to the nursing staff and because I was hooked up to a electronic fetal heart rate monitor that is also supposed to monitor contractions (and it’s wasn’t showing any). The nursing staff to me I was wrong, I was not having contractions (I kept timing them anyway – every 3 min).  I had to wait a really long time for the test results to come back and it was getting really late in the day so the nursing staff decided that I should eat some dinner while I waited. They let me order off the cafeteria menu and brought me what I assume was a really expensive hospital dinner (it wasn’t itemized out on the hospital bill – and insurance covered it anyway). When I set up to eat my dinner suddenly the fetal heart rate monitor started reading the contractions that I had reported. If you are not familiar with these monitors they are a sort of plastic disk censor that is ace bandaged to your tummy, there are actually two censors and two ace bandage sets one measures contractions via some sort of pressure monitor and one measures the baby’s heart rate via Doppler. They are really hard ot keep in place on a very round surface (the pregnant belly), especially if you are moving around they are constantly slipping up or down and are quite annoying, but I will blog more about that later. When I set up it suddenly made the pressure monitor able to measure the contractions that I had reported and the printer that these censors are connected to started printing out a series of nice little hills and valleys on it’s graph paper. That did get the nurses attention, she was shocked and said “I guess you are having contractions” This necessitated more test, they like to look for a protein that indicates you are likely to go into pre-term labor. I didn’t have it, and I wasn’t dilating. It was determined that I was just having a reaction to the adrenaline from being in an accident which is totally normal. They thought the contractions would stop on their own but after a long period of observation they did not. So then I got  a shot of a drug called terbutaline which is a form of the hormone epinephrine which causes the uterus to relax. It has horrible side effects (makes you feel really jittery and jumpy) but it worked. It stopped my contractions and after a bit more observation they let me go home to sleep. Of course this was very difficult as the terbutaline made me feel like I had drank about 12 cups of coffee. And that is the story of how Simon was not born at 33 weeks gestation I ended up with my Toyota matrix. I went on to carry Simon for another 5 weeks and had a great birth at our planed location of the Puget Sound Birth Center. Anyway the whole 33rd week of this pregnancy I have been super careful in the car and I have been giving anyone I have been following a large space (especially in rain). That is the only accident that I have been responsible for and I would like to keep it that way!